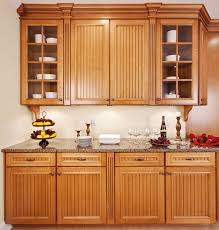 That was a stupid idea….

Put Down the Beadboard Door Sample…

Beadboard is interesting and lots of folks wander in asking about using it in the door panels.  The problem is that food, grease, lint, and fibers build up on the grooves over time.

The sheets are usually made with a soft tropical hardwood as the core and ran through grooving machines using roller dies to smash the wood fibers into the bead shape.  This leaves a jagged edge that catches fibers out of any cloth used to clean it and the sheets are not true 1/4″ most of the time so there are gaps around the perimeter of the door panel to store more gunk.

And no, you can’t pile on enough clear coat or paint.  The coating will flow right around the sharp points and surface tension will cause it to not fill the defects.

That was a stupid idea…..

Five part drawer fronts, no, no, no, and no.

The narrow drawer fronts on the cabinet set to the left are five part fronts. Why are they named that?  Two stiles, two rails, and a center panel.  Five parts.  Just little doors actually, made the same way.

They are not good for several reasons.  First, that tiny little strip of material in the middle, the worst place to put a pull by the way, means the rails (horizontal parts) have to be less than 2.625″ wide, a standard quality rail/stile width.

Narrow boards tend to warp much easier due to the less width of the part.  Fewer annual rings in the part and there is a magic number on width, too many annual rings and you have cupping of the lumber.  Too few and all the annual rings are of the same angle and the part turns trapezoid shape across the width as it ages.

Betcha they will warp and the joints will crack..

Taking that rail width down to 1.5″ means 1″ x .5″ of surface area to be glued.  That is half the surface area of a properly sized rail.

Glue surface areas are like  beams in engineering terms, half the depth or surface area, four times less holding power or strength.  Coupled with the angle of the annual rings and you can have some warped top rails that move so much that the elastic qualities of the glue fail and the glue joint fails.

But they sure are pretty in the magazines and in the showroom.