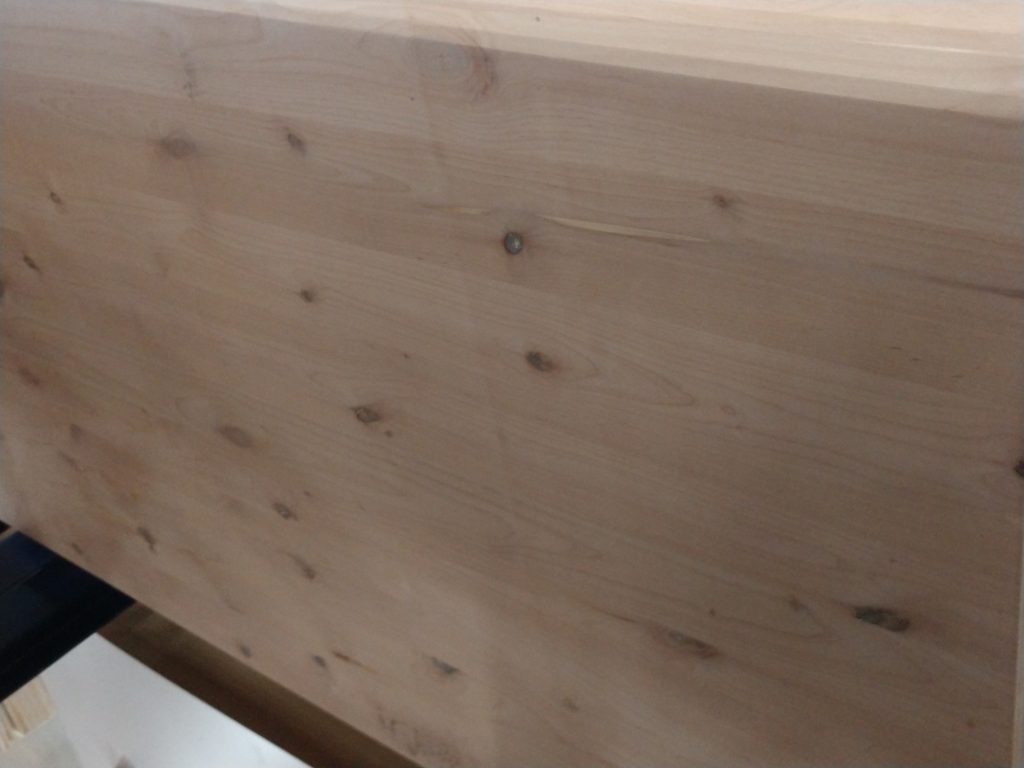 Low bidder that worked for the previous guy

Most Oklahoma City builders are obsessed with cutting corners on as much as possible and that includes kitchen cabinets.  The absolutely cheapest set of cabinets are site built or stick built, called that because a stick is nailed to a wall and another stick is nailed to that board till you have cabinets.  They are the cheapest for three reasons, not much material, cheap unskilled labor, and substandard materials.

You will notice in the cabinets above that a cat could run in one end and out the other because there aren’t any bulkheads or dividers between the individual openings.  Talk about saving some materials but there is also no support for the countertop.  The drywall is the cabinet back, as it is built in place one isn’t “needed”, till the drywall gets beat up with use.   A competent Oklahoma cabinet maker isn’t going to put out kitchen cabinets built this cheap.  Most OKC cabinetmakers are busy enough with regular business.

Always site finished by the house painter instead of a competent finisher, nearly impossible to modify or retrofit as they break down, but the builder saves some cash.

A homeowner given the chance to spend $200.00 on something better than particle board will jump at the chance, a builder looks at the ten houses he will build that year and see $2000.00 in his pocket.  Drawers are always plywood or 3/4″ pine, drawer slides falling out in a few years because they stapled the plastic brackets to the wall instead of using screws, and the doors and drawer fronts were bought from the cheapest door shop around.

The guy that made the cabinets used to work for the previous “cabinetmaker” but after a few jobs he “knew” enough to strike out on his own by undercutting this boss’s price and he knew that price because the builder told him the price.  Well sorta, the builder told the new guy what he would pay which was half what the previous “cabinetmaker” was charging.  The new guy isn’t a businessman, has no idea what to charge or what it is going to cost him to build the set. And he certainly isn’t a cabinet maker.  Sadly this is how most Oklahoma City cabinets get built.

Then There are the “Designs”

These pictures are from million dollar homes in the Oklahoma City area and not a lot of thought was put into the design or layout other than it be kept under budget.   Having a sink backed up to a stove means splash the cook and make them walk around to dump the dirty pots and pans, and the shape of that island….looks like an Imperial Cruiser coming out of Hyper Space, done in a dark finish of course, built using  the finest particle board and inexpensive popular wood.

You know there was some OKC cabinetmaker that was at one time desperate enough to work for a builder like this but you can bet they either wised up or got put out of business.

Builders are experts at making something look attractive but beneath the surface & upon closer inspection you realize that its poorly constructed or poorly laid out.  This is an example of a poorly laid out kitchen.  This is a kitchen not designed by someone who cooks a lot.  Notice how close the sink is to the back edge of the island.  Water will be splashing & running all over the place not to mention right where someone who will be working at the range will be standing.  Things like this are apparent to an experienced cabinet maker that has spent his life building kitchens but not as apparent to the homeowner that might not have ever had to design a kitchen.  And the big box store salesman selling cabinets in Oklahoma City, well they sell what they make the best profit from and can get easily.

In a million dollar home no less

Consider that this is home valued at million dollars or close to it.  The drawers built not with solid wood, but with plywood which has no place in a drawer side  for a million dollar home in Oklahoma City!  Notice all the wasted space because of the face frames.  They used what looks like 3″ of wood on the top rail.  The slim cabinets on both sides of the microwave could be spice pullouts but a builder would not go to that expense.  And lets make sure that angled drawer hits the fridge if you try to remove the drawer for cleaning.

Notice the lack of counter space on both sides of the cook top.  This kitchen, by the size of the appliances, was meant for someone who likes to cook a lot. I hate it when builders place a cooking area in a brick or stone surround.  It would be like cooking in a cave.  Again, designed by someone who does not cook, this would be troublesome to a real cook who needs utensils, & landing space near the cooking area.  You have to walk across the kitchen to get your ingredients.  This is awful.  An Oklahoma City cabinet maker would shudder at this.

And that color,  Army Surplus Store having a sale on olive drab green paint?  Was this the last job that Hernandez and  Paco painted before they were deported back to Mexico?  Or were they out of thinner to stretch the pain a bit further and took a whizz in the paint bucket? 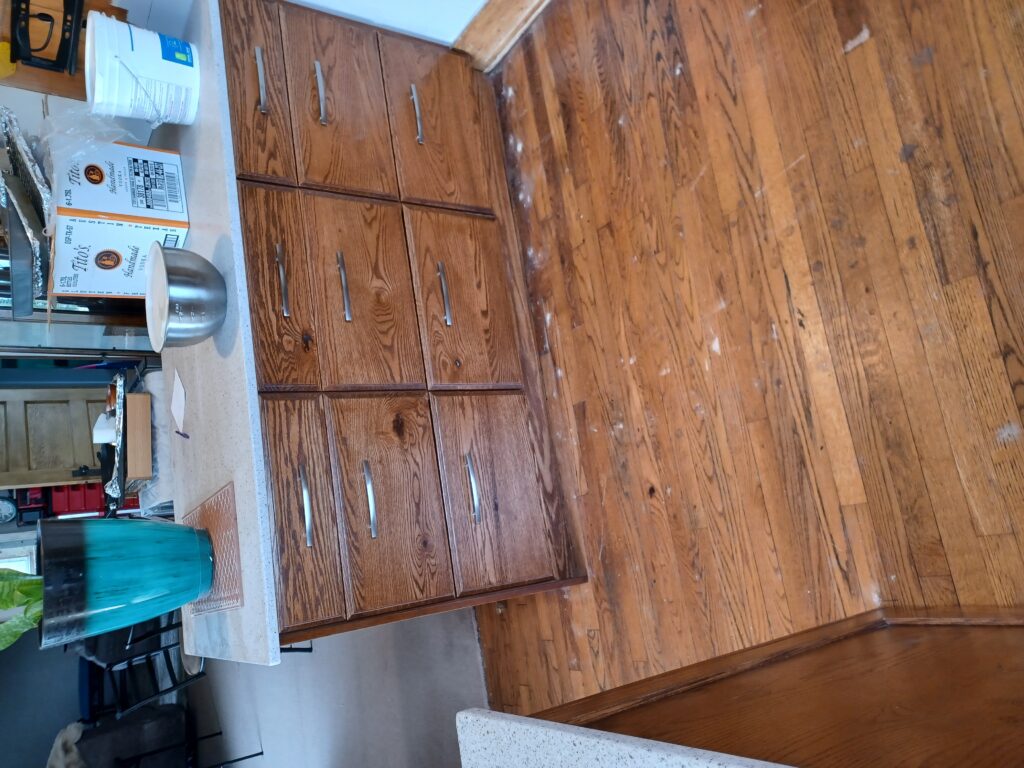 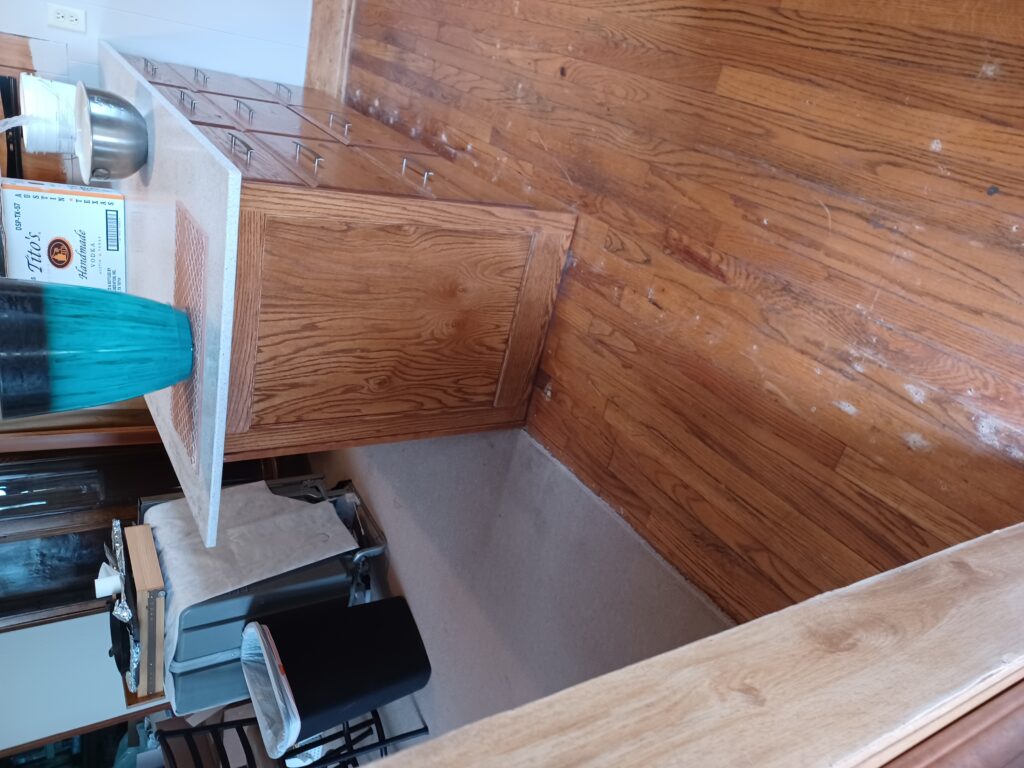 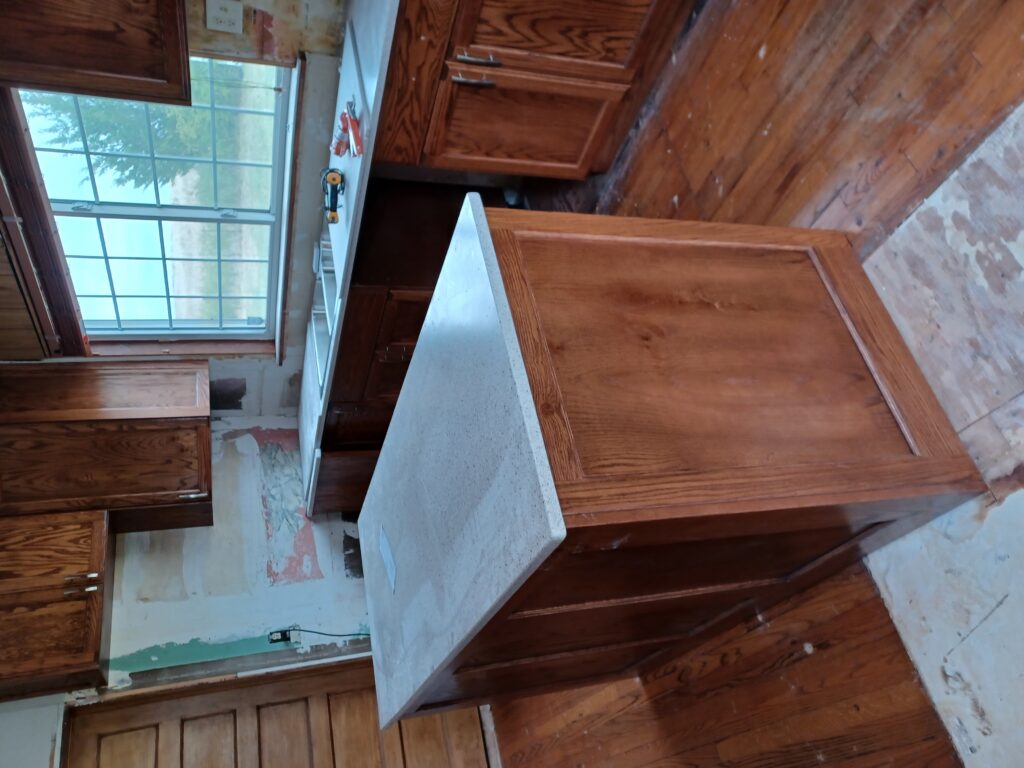 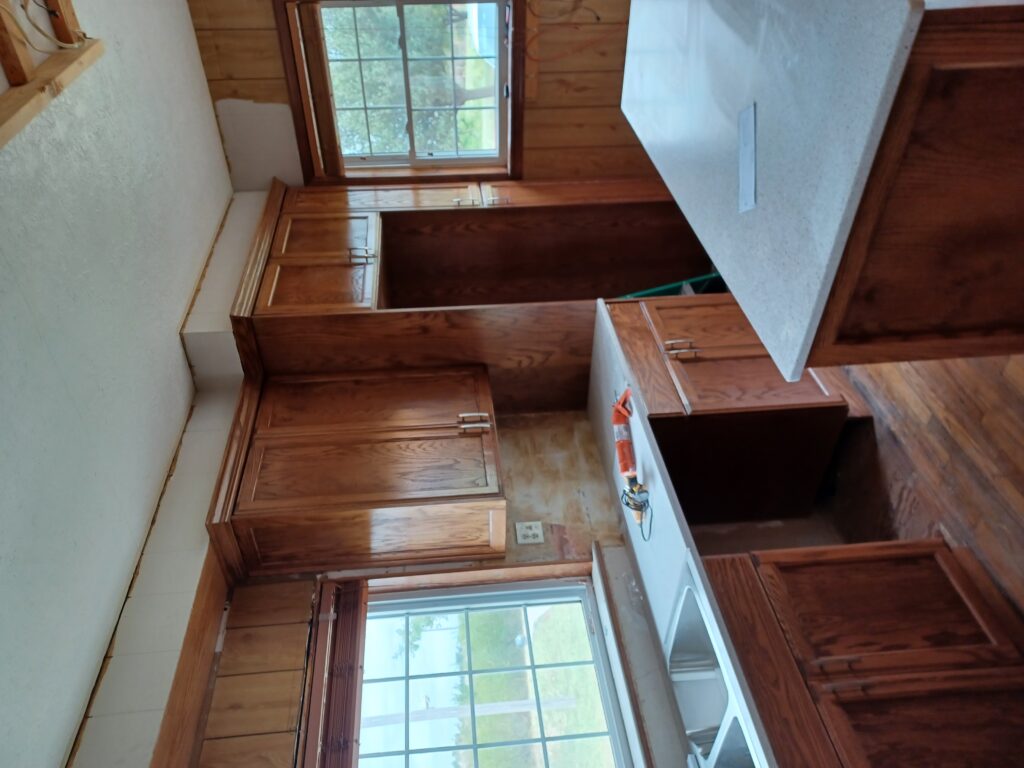 This was a nice rustic red oak five part door set set out near Bridge Creek.   The peninsula in the far left picture if you are looking at this page on a laptop or desk top computer has nine large drawers and a five part end panel and back panel. The fridge has an overhead cabinet and a narrow but deep pantry to the right side.  The island has a five part back and five part end panels.  A stove goes over on the far left side of the kitchen with the base cabinet to the left of the window being a blind corner cabinet.  The cost was  just over $13,700.00 plus another $4,005.00 for the solid surface countertops.  These are all post covid prices.
Save