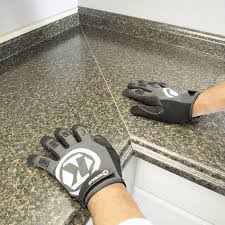 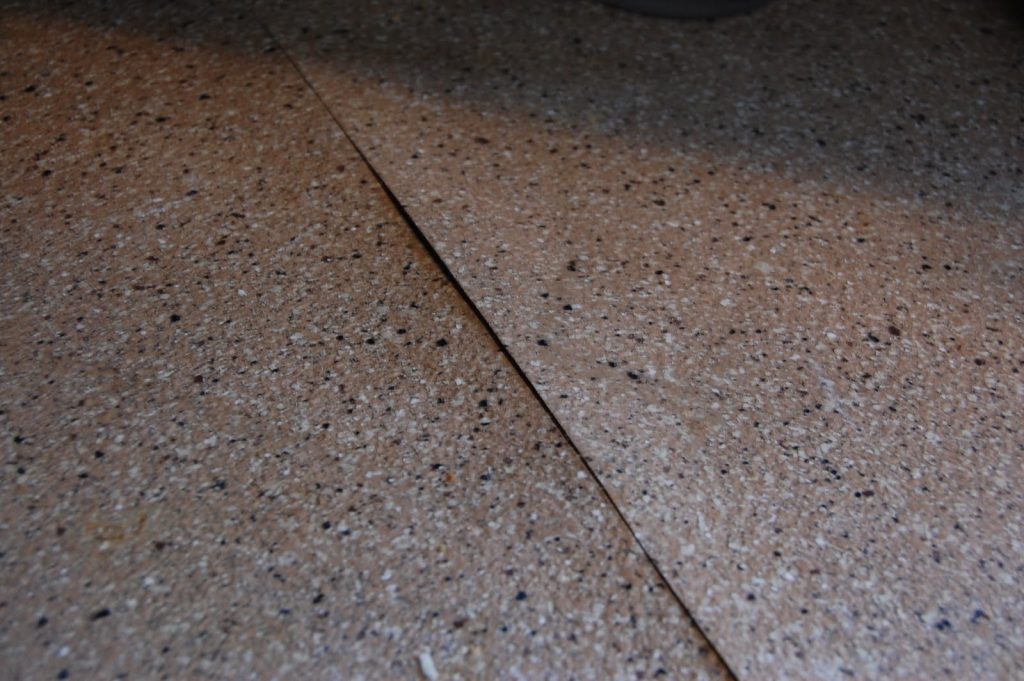 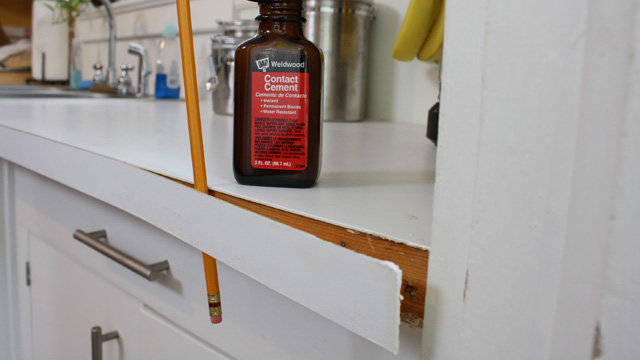 Plastic laminate is made using resins and paper.  Brown paper for the bottom plies, a thin color layer near the top, protected as it were by a thin clear layer.

Twenty five years ago laminate was pretty good materials but as industry learned to adopt soft start motors controlled by PLC or computerized systems they found they could make the paper thinner and thinner especially on the more expensive clear layers and color layers.

Once I had a dentist want me to recover his dental fixtures he had bought twenty years earlier so I took an old strip off the fixtures and sanded through the clear and color layer till the brown paper showed.  Ten thousandths of an inch, the same thing with the new replacement laminate was only two thousandths of an inch, five times thinner.  Which is why modern laminate isn’t lasting as long as it once did.
.

The older laminate was great to work with.   When I went through the apprenticeship classes at the Carpenters Union they had us make a tool box covered in laminate.   You just glued the material down and it stayed down and grab a flush router with a bearing and zip down the sides to remove the excess.  You can’t do that with the modern laminate, it will scratch and even burn through unless you  take heroic measures like masking tape and WD40 or wax.

Then around that same time California had their war on chemicals and some of those chemicals were what made the old laminate glue work so well.   If you can’t sell something in California then you lose the biggest market in the U.S. so the companies all switched to the newer formulations. 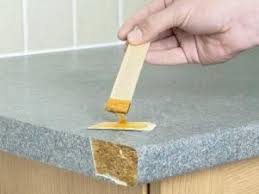 These days you spread two layers of glue and let each layer dry before trying to stick the laminate and you make sure you use particle board as the co efficient of expansions are nearly the same.  That is the expansion rate and the reason for the expansion and shrinking matching up so that the laminated materials don’t rip themselves apart as it shrinks and expands.

We still will do laminate for commercial jobs where the expectations are low as they deal with it a lot.  I’ve seen batches of laminate that expand so much that the wall panel buckles at the joint where the contractor refused to listen to our installation advice (we sold them the panels and wouldn’t install under their standards).

The worse thing about a laminate top is keeping an edge on it and keeping the seams from swelling up and splitting.  Wood edges hold up the best but around a sink the finish goes bad pretty quickly.  The preformed tops work better as the laminate rarely will lift up on the edge as they heat form the curved edge but invariably the joints draw moisture, swell up, and look bad in a few years.

The self edging, strips of the same materials glued to the edge of the countertop, eventually peels off as cleaning agents and grease get under the laminate.  Understand that plastic laminate grew out of the old practice of covering countertops with linoleum and they always used a metal edge nailed on to cover the edge and protect the leading edge of the countertop.  That worked pretty well actually but it was always intended to have an expected short  life span.  This is still very common in a lot of third world countries. Once our kitchens began to have running water and sinks replacing the linoleum became a chore and the harder plastic laminate came into being, just a stiff form of linoleum actually.

There are “undermount” sinks available for plastic laminate counter tops but they are bastardized things that simply are not going to hold up to normal kitchen use for that many years.   If your budget only allows laminate then I would stick with the drop in stainless steel or porcelain sinks.  You will need to keep the caulk in good shape, plain old vinegar will help soften the old caulk to remove it, just be sure and clean the surfaces well and let them dry before re caulking.

You are going to save around one third of the cost if you go with a laminate top but you are also going to spend that same money again in five to ten years and the counter will be beat up long before that. And when you replace the top you hire the plumber again and redo the backsplash so it is a false economy.  One is better off just waiting a few months and saving the extra money for a decent countertop.