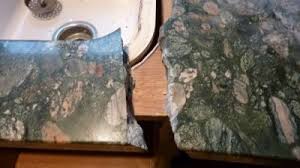 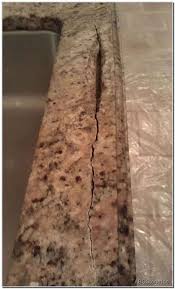 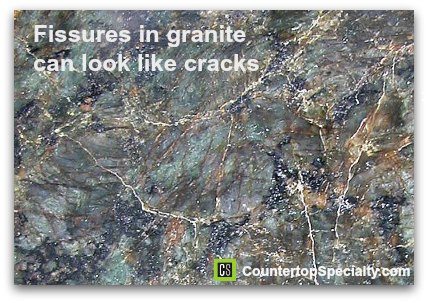 The Crack Cocaine of the Countertop Industry

Buy it for a few bucks a square foot, sell it for ten times that, the product that has ruined many a countertop shop’s reputation

Some granite fabricators offer a warranty on their labor but it isn’t the labor that causes a granite top to crack, stain, etch, or sinks to fall out.  It is the crappy material that is being sold as suitable granite countertop material.  Back in the day the granite fabricators would refuse to use the weak but pretty stone that is sold these days.

Granite comes out of the earth in huge blocks, blasted or wedged free of the surrounding rock.   Only about 5% of the granite that comes out of the earth winds up in a home, the rest is rejected or wasted in the process.  Those blocks of stone were under millions of tons of pressure until freed, then they are allowed to season to release some of the internal stresses before being sliced up into slabs.

A good number of those slabs never make it to polishing because the internal stresses either break the slab or warp the slab. Before the slabs are polished they are slathered with polyester fillers to attempt to fill weak points and cracks, with the weaker stone having fiberglass mesh glued on the back so it can be handled.

Once a slab has been polished even more slabs will warp as the internal stresses relax.  One thing a good fabricator does when he goes to pick slabs is to take a six foot level for a straight edge.  Once the slab is laid down and individual countertop parts are cut out the internal stresses again are redistributed, sometimes binding so hard it will trap a saw blade during cutting.  At that point you are in a race to get the countertop installed and deposit the check before the internal stresses break the granite top.\Back in 2007 a “black list” made by the stone fabricators on stoneadvice.com surfaced but once the list became public the stone fabricators that run the forum pulled the black list from public view.  It was a great resource for consumers to avoid the worst natural stone slabs. 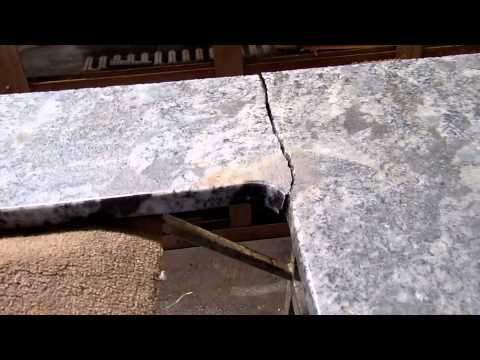 And bacterial love colonizing granite countertops.  Not only is it difficult to sanitize without using bleach the bacteria can actually colonize the interior of the stone.  People think that granite is nonporous and chunks of it might be  but is is permeable and allow water and bacteria  to pass through.  There have been NASA studies that have found granite colonizing granite centimeters below the surface and deep coring drills have proven that bacteria thrive miles below the surface of earth. Sink rails are so narrow that granite fabricators have to groove the bottom side to insert steel or fiberglass reinforcement rods or flat bars.  A channel is ground out and the rodding is poured in polyester resin (AKA epoxy).  The problem is the fight for room at the back of the sink where the faucet holes are drilled and in the end the only thing the rodding does is add a bit of strength and keep the broken parts together so they  can be glued back in place after they snap. Then due to the water, and granite will soak up water like a sponge, the steel will rust, expand as it rusts, and splits the countertop rail like in some of the pictures on the left of the page.

Then there is the staining and sealing doesn’t prevent stains, it does give you a few seconds to wipe up a spill to prevent a stain.  The sealing must be constantly replaced as cleaning and use removes the sealer.

Heat will crack granite due to thermal expansion so never place hot pots or appliances like crock pots on granite tops.  As an aggregated natural material the stone will have minerals with different co-efficient of expansion rates so with temperature changes you will see little chunks spontaneously pop out of the top so never drag anything across a granite top.  One needs to remember that all the sand in the dirt, rivers, and beaches of the world was once a mighty granite mountain worn down by water and temperature changes.

Cleaning granite can be a mine field as well with only mild soap and water being recommended.  The wide chemical variations found in granite will react with acidic or alkaline cleaning products to stain or etch the polished surface.

There was once a great website and forum on stone called findstone.com but the website was taken down at the behest of the granite industry as it had too much information that was negative to natural stone.  You can Google the website name and find references to it and a Facebook page but this massive website and forum is long gone, probably bought by someone in the industry and shut down to keep the negative information away from consumers.

There was a major controversy back in 2008, every single radiation safety organization in the nation got involved and scientific conferences would have as many as a half dozen granite countertop radiation or radon studies.  Ultimately the EPA changed their website acknowledging granite should be tested if used for a countertop.

NIOSH, the scientific arm of OSHA, was willing to fund studies but they didn’t have the expertise so they turned the problem over to the Oklahoma Health Science Service here in Oklahoma City who did a pilot study that choked the testing equipment on the first run, and the second ran resulted in so much risk to the test participants that their lawyers shut the project down.      How hot can a granite countertop be?  Radioactive enough to make an X ray, see the pictures to the right if you are on a laptop or desktop computer.  You can see the outline of the scissors and coins as well as a couple of very hot spots. The metal blocked enough of the radiation to produce the image, just like bones in humans  show up because they block the radiation.

However, one of the most troubling issues is that uranium is only one of the many radioactive heavy metals in granite countertops and there are also just about every other toxic heavy metal known to man inside many of the common granite materials. 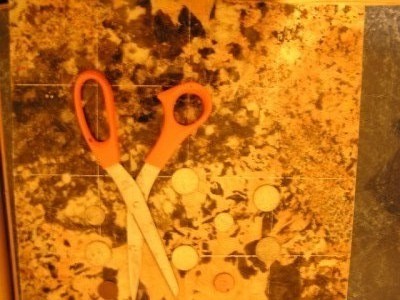